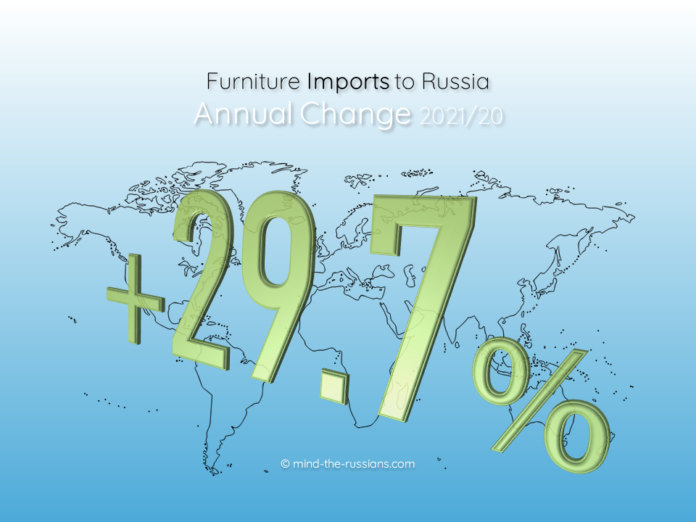 From January to December 2021, the volume of furniture imports to Russia reached 2.57 billion USD. This represents a 29.7% increase to the corresponding period of the previous year. This gross estimation also includes parts of furniture, mattresses, bedding, mattress supports, healthcare and other professional furniture, so the HS codes 9401, 9402, 9403, 9404 are considered.

The weighted average of the currency exchange rate was 73.6541 RUB for 1 USD in the current period under review. This rate shall be used to accurately convert the imported value to rubles, for further market analysis in parallel to domestic production numbers given in current manufacturers’ prices.

Currently, the imports ratio in the furniture market is not measured by the official statistical bodies in Russia. According to our own calculation of the internal furniture consumption (production plus import minus export, “gray zone” excluded, healthcare furniture included), the market share of imports is reaching 41.6% in the reporting period.

From January to November 2021, the volume of furniture imports to Russia reached 2.31 billion USD. This represents a 30.6% increase to the corresponding...
Trade Relations

From January to October 2021, the volume of furniture imports to Russia reached 2.07 billion USD. This represents a 31% increase to the corresponding...